Is your baby hitting head with hand? Or the baby might keep banging the head against the wall, or crib, floor, or mattress? Despite how uncomfortable it may seem, the phase is normal most often.

Let’s unravel why these repetitive moments happen and how to react in situations in which young children hit themselves!

In rare cases, when a toddler hits himself, it isn’t too harsh to cause any injuries, and the baby banging head phase will go away over time.

But, let’s cover everything in-depth, so you can rest assured that everything is okay with your kid!

Why Is My Baby Hitting Head with Hand?

According to Clevelandclinic.org, a baby slapping head is part of the normal behavioral phase. It often happens before bedtime and might be followed by body rocking.

Another source explains that around 20 percent of babies, more frequently boys than girls, bang their heads. The behavior may occur after six months from birth, and last to the second all third years.

But, why do babies hit their heads? Let’s go through several reasons.

Child Bangs Head As Part Of Growth and Exploration

In a baby’s life, there are several important developmental phases. Baby hitting head on crib, is understood in the scientific community as normal, repetitive behavior, as a way for the baby to interact with the world around them.

Babies hitting head on floor is a way for the baby to discover space. Other developmental phases and repetitive behaviors, such as thumb sucking teething or humping objects, aren’t as scary as hitting the head, but those have similar roots and causes.

Toddler Banging Head Due to Frustration

Why does my baby hit his head with his hand when mad? Commonly, a toddler bangs head when upset. It is a sign that you might have done something to upset the child.

For example, you might have served broccoli instead of carrots, and the kid doesn’t have language skills to explain the feeling. At this moment, temper tantrums or sudden emotional outbursts happen, and toddlers may express their feelings differently.

As the baby gets language skills, head banging will naturally go away. You can also distract the baby with Montessori toys that improve social or emotional skills.

Baby Bangs Head As A Way to Self-Soothe

When a child bangs head before sleep time, it can be the way to soothe and fall asleep. The scientific term is rhythmic movement disorder. In most cases, children hitting themselves before sleeping is a short-term behavior that doesn’t last more than 15 minutes.

If rhythmic movement disorder happens near sleep time or during sleep, there is nothing to worry about.

Hitting the head before sleep is like other repetitive habits such as rocking or leg shaking. Some children enjoy rocking before sleep, other babies hit their heads repeatedly until they fall asleep.

Simply, banging the head is a rhythmic movement that calms the baby. Often, when the baby wakes in the middle of the night, he might repeat the motions to soothe and go back to sleep.

However, some parents may find this behavior disturbing, especially if you wake up to see your little angel hitting his head over and over again. If the kid bangs the head against a pillow or mattress, don’t intervene.

Wait a few minutes, so you’ll see your baby falling asleep again. You’ll disturb the kid more if you transfer it to your bed, then leaving the baby to self-soothe.

Watch the video to understand more about baby’s sleep movements:

Baby Slaps Head As A Gesture of Pain Relief

If your baby keeps hitting the same area continuously, it might be pain related and indicate that the child experiences pain in that area. The new tooth coming out is irritating for the children. The same applies to ear infections or a sore throat.

Some babies won’t always hit their heads when in pain. Some might rub the area or scratch it, and won’t allow you to touch the painful place.

My little girl was rubbing her ear when she had an ear infection. After the first couple of infections, I noticed the pattern and was able to react in time.

Therefore, keep an eye for repetitive and localized behavior to check if your child is experiencing pain.

Child Enjoys Seeing Your Reaction From Their Head Banging

Lastly, when a baby keeps hitting head with hand, it can get your reaction. Think about what you are doing when the baby bumps head on crib. Do you gasp and kiss the sore place? Or do you ignore it?

If you do the first one, the chances are that your baby hits head on wall or floor to get your attention. You should ignore the behavior or offer something else instead of your undivided attention.

Wait several seconds and give your child a toy to distract him from waiting for your love expressions.

The Different Forms of Head Banging in Children

There are several ways the head banging manifests in babies and toddlers. Sometimes, a baby hits back of head with the hand or other objects.

Other times, children might bang their head against the wall, crib, mattress, pillow, or any object near them at the moment when they feel frustrated.

Rhythmic movement disorder or repetitive head banging that happens before sleep might occur when a child is in an upright position, so you’ll notice the baby bangs the crib railing.

Additionally, some babies who seek their parent’s reaction might keep hitting themself with both hands or using toys to hit them.

But, identifying the reason why do babies bang their heads is not always accurate only by observing the form of head banging.

What To Do When Baby Hits Head?

Despite the fact that head banging is normal and common in babies’ development, most parents find it disturbing. So, instead of imagining worst-case scenarios and linking the head banging with mental illnesses, you can try some of the following ways to respond to this behavior.

Ignoring the head banging is the most challenging, and the most effective way to deal with it. If your kid is banging head against pillow or mattress to get your attention, try to ignore it, but only if the kid is safe during head banging.

When there isn’t a risk of self harm, ignoring it might help the child continue with the meal or play, or go back to sleep. Don’t worry, leaving your kid in the crib to sleep instead of bringing him in your bed won’t affect the parent-child bond.

However, if your kid keeps banging his head against the wall or crib, you can try some of the following ideas to address the problem.

Sometimes, hitting the head against the crib or other crib alternatives makes loud sounds which further encourage the baby to continue doing it. You may move the crib from the wall or use pillows in the crib to mute the sounds.

Also, ensure your child is comfortable in the crib, and you’re using the correct mattress height for the baby’s age. You can also teach the baby to sleep in a crib, assuming that the crib is comfortable and a safe sleeping environment.

For children with rhythmic movement disorder, it is useful to come up with a calming sleeping routine.

The first thing you can do is dim the lights or turn them off completely. You can find some soothing soft music, use baby light projectors or use a device with white noise at a safe distance, which is around 7 feet away from the crib.

Instead of music, you can try reading your child a story. Even though the baby won’t understand the story, the sound of the parent’s voice may be enough to help them calm and fall asleep easier. If you feel like it, you can sing a lullaby or use a device with lullabies.

For a nighttime routine, you can include a warm bath and a tummy massage.

Lastly, you may try rocking your baby to sleep. It is a beautiful routine for both kid and the parent and helps you build a sleeping routine easier.

However, be mindful of when to stop so it won’t cause sleep disorders or affect the sleeping routine when your kid gets older.

When Is Baby Head Banging A Huge Problem?

As you can see, head banging for most babies is a common and normal phase in developing their attitude toward their environment – parents, their emotions, and objects around them. Many times, you have nothing to worry about.

However, there are a couple of cases in which you should see your pediatrician.

If your baby hit head hard on sturdy objects, or edges of the chair, table, or a crib that caused visible cuts, swelling, bulges, and dents, seek medical help immediately. Severe injuries rarely happen during the head banging phase. However, if those occur by accident, ensure you react on time.

When your kid keeps hitting his head frequently and it causes bumps and bruises and does it too often, schedule an appointment with your doctor. Sometimes, an underlying condition causes pain in babies, so they try to distract themself from the pain and discomfort they feel.

Sometimes, the gastroesophageal reflux in babies might make them continuously hit their heads. You can have your kid checked for throat infections, reflux, ear infections, etc.

You should discuss delayed speech, delayed gross or fine motor skills development, accompanied by head banging with your pediatrician. Also, if the baby has poor socializing skills before head banging, discuss it with your doctor to rule out various conditions.

Babies with disabilities or developmental delays who bang their heads might develop more severe issues. In these cases, most doctors will recommend closer observation. That way, the pediatrician may rule out some conditions.

Before you see your pediatrician, keep a journal in which you’ll write short notes about the frequency and form of head banging in your child. It can also be helpful for the doctor to see a video of your kid banging his head. So, instead of gasping when your baby starts hitting its head, you can take your phone and record a video.

Raising a kid is challenging, especially because many milestones can go unrecognized, and be misunderstood as harmful. For example, is head banging normal? Toddler hitting himself rarely indicates a developmental problem. It is more likely a self soothing technique that many kids repeat.

Often, hitting the head is normal behavior that happens in early childhood. It is part of rhythmic movement disorder, or a way for babies to express their strong emotions!

But, missed developmental milestones and head banging, are a reason to talk with your pediatrician. 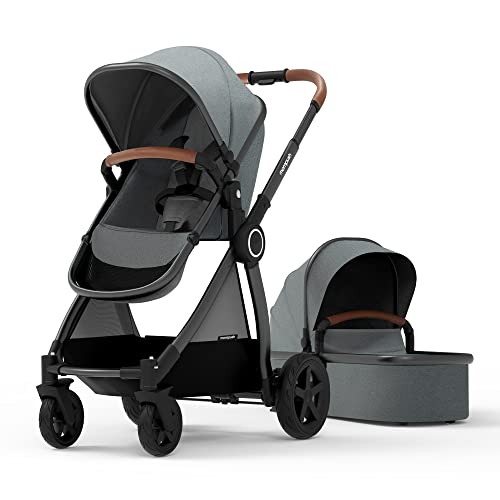